We have had the chance to chat with Bill Roper, Design Director at Cryptic and Executive Producer of the super-hero MMOG Champions Online, on the launch of the game, its current status and the changes to come. 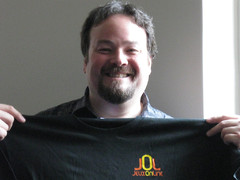 JeuxOnline : So for the record, could you please introduce yourself ?

JOL: Champions Online been out for a little bit more than two months now and it seems to be doing well. Was the launch of the game and the response of the players up to your expectations ?

BR: Launching an MMO in the current market is definitely tough, but we've built a great community of really dedicated players. They're incredibly vocal, and this allows us to be very responsive in terms of making the game what they and we want. The launch was incredibly smooth from a technical perspective, and we've been working hard ever since to stay in constant communication with our players.

JOL: What do you think could have went better ?

BR: We definitely could have been much better balanced, especially in terms of overall difficulty curve and resource(in-game currency) allocation on day one. Because of egregious issues that came to light when we started the Head Start program, we had to make a large balance change on the first day of global service. While it addressed the fact that the game had become trivially simple and made it more challenging and fun, it also caused a great deal of concern and uproar from our earliest players.

The economy issue was addressed within the first couple of weeks of the game being out and resulted in us greatly increasing the item drops and pure resource rewards from defeated enemies, but it also meant that retcon pricing was very out of line early on. 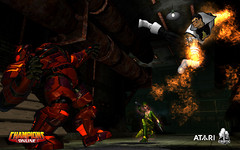 JOL: The previous superheroes game of Cryptic, City of Heroes, was not built on a licensed framework compared to Champions Online which is based on the Champions pen and paper game from Hero Games. What do you think are the pros and cons of each ?

BR: I actually think we got the best of both world with Champions Online because Cryptic purchased the Champions license. This means we were able to utilize the 28 years of world lore, heroes, villains, agencies, places, story line, and so forth without having to fight with another company if we wanted to modify or update specific elements. A good example of this is that we refreshed a lot of the costumes for the signature heroes and villains in the world.

We were also able to create new elements that have now become a part of the Champions cannon. Best of all, the paper and pencil game is still thriving, and we've worked closely with those designers to share assets so our game can be integrated with the new 6th edition of the Champions RPG.

JOL: Very interesting, how do you think Champions Online will change the 6th edition of the pen and paper RPG?

BR: They're going to be putting out a special world book that has the updated heroes and villains in it, as well as showing how to build our powers and powersets with the Hero system.

JOL: I am sure it will please the players of ChampO that were thinking of buying the table game from Heroes Game. Lets switch to the game itself a little bit more now.

Recently you've added repeatable and destination quests to fill a gap around the levels 18-21 and 31-34, together with the new "crossover missions". Do you also plan to add more missions, in order to diversify the gaming experience, for let say the players that like doing "rerolls" ?

BR: We definitely want to keep adding content into the game, both within the current leveling curve and also at the end game. Champions Online definitely appeals to players that want to have several different types of heroes, so providing them different ways of growing those characters is going to be important. We're working on different game systems right now that will allow players to do a lot of different things over the course of their hero's career.

We're also working on new end-game content for those high-level heroes that want more to do. In fact, our next big content push will feature a new 5-hero Lair that combines the Unity and Nemesis systems. It's easily the biggest and most challenging in the game! 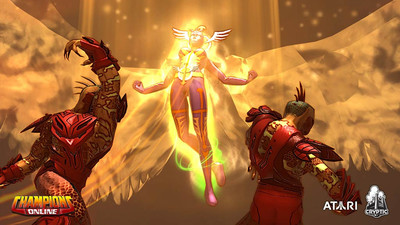 JOL: About theses updates to come for the UNITY and Nemesis Systems, what would they be, can you give us information about what they will add or modify ? Also, since we are talking about the UNITY system, when is scheduled the "omega crafting" ?

BR: We're hoping to be launching a teaser video in the next few days on the UNITY / Nemesis crossover, but here's a sneak peek: It'

It's called Nemesis: Confrontation. 5 heroes. 5 Nemesis. An epic villain of Legendary proportions bringing them all together in a distant locale. This is a repeatable Lair that has all-new rewards and threats. We've been spending a lot of time on it to make sure it's challenging and fun for our level 40 heroes.

As for Omega Crafting, we'll be introducing some unseen craftable item types by the end of the year. So start saving up those high-end components!

JOL: Still about missions, can we expect then to see a new instance system, that would adjust with the size of the team, like in City of Heroes for an example ?

BR: This is one of the many things we're looking at doing. There are a lot of things on our design / technology lists to get done that will improve the overall playability and ways that players can experience their heroes.

I don't want to go into TOO much detail on unimplemented systems, but the best way to put it is that we're focused on creating extensible game systems as opposed to only making new missions. We know that gamers are voracious in their desire for more content, and no company can keep up with that.

Our goal moving forward is to combine the creation of new content with game play systems that together create many more options and hours of game play than we could achieve by making new instances or zones.

JOL: While the game is mostly PvE oriented, the numerous PvP modes are very appreciated within the community and those added with Blood Moon seems highly popular. We already know "Zombie Apocalypse" is going to be a permanent feature by now, but are we also going to see, in the already planned types, some with fixed builds like in "werewolves vs. hunters" ?

You also mentioned in the PvP DevChat that there would be a kind of "Capture the flag" PvP game, can you also tell us a bit more about the other ones that you are planning for the future ?

BR: We are definitely keeping Zombie Apocalypse around, but the BITE event was meant to be very specific to the Blood Moon event since you don't actually play your hero.

Moving forward we're going to continue to create scenario-based PvP maps as these seem to go over the best with our players. We're obviously looking at the standard ones like Capture the Flag or King of the Hill, but there are a couple of competitors for what's next in the pipeline right now. One is more standard, and the other one is.... well, kind of out there. I think it will all come down to how fun they seem and how long they'll take to implement 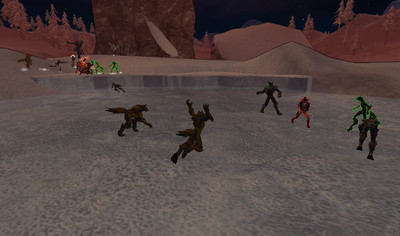 JOL: Like we've just talk, players got the Blood Moon event for Halloween and you've already announced in the last "State of the game" that a winter event is coming in December. Can you share some information or hints about theses with us ? Will it come with a new powers set like Halloween with the addition of the Celestial set ?

BR: We won't have a new power set for the event in December - they take a LOT of time to do. We will have some presents for our players to give and receive though, in the form of some surprises scattered throughout the world. We're also going to be unveiling a new type of enemy - a REALLY HUGE one - that is designed so that players of all levels can fight side-by-side against it.

This should be incredibly fun since a band of level 40s can't just crush it, but it could also be taken down by groups of lower-level heroes. The idea is let a team of heroes from all level ranges be able to contribute meaningfully to a fight while also running similar risks.

JOL: While one of Champions Online strengths is to be able to pick up powers from different sets, some players are wondering if it would be possible to see the emergence of tier 4 or 5 powers, or even some epic powers ? Something that would reward players that choose to invest themselves in a unique powers set rather than pick up some in other sets.

BR: We are already working early designs for Tier 4 powers for exactly that reason - to give players a real reward and goal to push for.

JOL: You said at the beginning that you had to do a lots of balance work at the launch of the game, but bargaining and trading still seems quite dull in Champions Online, players are rarely trading or selling items. Some people suggested to have possibility to trade "insights" and the such to boost the crafting market. Is this a possible way ? Or did your team just already thought about improvements to make the crafting market more active ?

BR: The crafting system definitely needs a lot of attention, as does the auction house. We'll be making a pass through this at some point, but the sheer complexity of what's there, combined with the work that is already on our "Master of all things Upgrades" is daunting. I wish I had a better idea of when you'd see big changes to the system, but the first step is going to be making crafted items different moving from this point before we go back in and retool the existent workings. 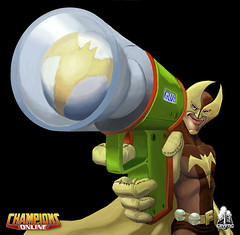 JOL: Are we going to get the chance to see you in game under the identity of Chronomancer ?

BR: I do have a Sorcery hero I play under that name, but I find I get inundated with questions whenever he shows up. I've had a LOT of fun the past couple of days playing as Foxbat on the Public Test Shard running costume contests and whatnot. I got to do the voice for The Mighty One in the game, and he's great fun to role play!

JOL: Numerous characters form the Champions universe have their action figure, how come Sapphire doesn't have her own ?

BR: We're far from done with making Action Figures, and we had to save some of our more popular heroes for Series 2!

JOL: And finally, to conclude this interview, can you comment the current state of the game and how you foresee the future of Champions Online ?

BR: The game is just getting better and better, and that's our focus moving forward. We're being very responsive to the interests and feedback from our players, and we're trying to tackle issues both big and small. Right now we're crawling through every power in the game and working on addressing balance concerns. And before everyone freaks out, that doesn't mean we're just pulling out the nerf cannon - a lot of the changes we're making increase the potency of powers, or change how they work for the better. We're also adding powers when appropriate to fill in holes. Our goal is to make Champions Online more fun, more accessible, and more of what our players want.

JOL: It was a pleasure to chat with you today. Thank you for your time and good luck with Champions Online and the upcoming Star Trek Online. 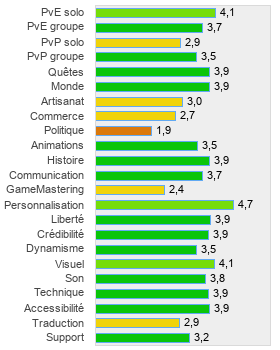